Humans are unique from much of the animal kingdom because we can control our speech. We have virtually countless ways to contort our mouths and tongues which is why our language is so much further evolved than any other animal. What’s interesting about laughs though is that none of this matters. When we laugh, our mouth basically just opens, air is squeezed through our voice box and the sound erupts from our mouth. It sometimes occurs against our will. You’ve likely experienced this if you’ve ever tried not to laugh at something you found utterly hilarious. It’s quite a challenge not to laugh, like holding in a sneeze. Laughs are spontaneous and often out of our control. I like how in the photo on the below, you can tell these ladies are genuinely laughing by they way they’re collapsing on each other.

It’s interesting that when we laugh, like really laugh, our bodies are rendered almost useless. We can’t talk or even breath: a pretty weird evolutionary adaptation right? Why would we have adapted to be so vulnerable in an instance?

There are different types of laughter. Some laughter overwhelms our motor system, while some seems a bit more “fake”. The word fake has a negative connotation, but it isn’t a bad thing at all. Laughter is a way to make and maintain social bonds. We use it to smooth over social interactions and make awkward situations or any situation a little more comfortable. This ”fake” type of laughter is more a part of our speech which is why we add so many “lol’s” and “hahaha’s” to our texts or maybe emails.

Laughter is different depending on the person you’re laughing (or not laughing with). We’re 30x more likely to laugh with people than alone. We’re also more likely to spontaneously laugh with people we like. You might even decide you like someone BECAUSE they make you laugh. Conversely, if you think someone laughs inappropriately, or has an irritating laugh, you may find that even though other people laugh with them, you don’t, and this might actually mean you don’t like them and that’s why you don’t laugh with them. That spontaneous laughter that occurs in some people, doesn’t happen for you with this person.

They looked at participants’ brain waves when listening to clips like these. The brain scan showed that with a genuine belly laugh, the participant focused on the sound of the laughter (parietal lobe), but with polite chuckles, the brain lit up more in the frontal lobe which meant the person was trying to figure out why they would be laughing – as more of a language/critical type of thinking. This is likely an evolutionary adaptation to differentiate the sounds someone would make if they’re in danger which can sometimes sound like laughter. You know how sometimes hysterical crying can sound like hysterical laughter but you can usually pick up on the difference relatively quickly if you try. On the other hand if someone politely chuckles in a conversation, it’s likely more part of their speech. It’s intentional. It’s setting the tone or the feel of the conversation.

Now that we’ve talked about the basics… here’s now laughter can actually be medicine. Just a reminder: When we talk about the health benefits of laughter, we’re talking about the spontaneous genuine sort of belly laugh. The type that sort of paralyzes your motor skills.

This type of laughing releases endorphins via opioid receptors. The more receptors, the more powerful the effect of the laughter is – it’s addictive and can produce euphoria like a narcotic. It’s contagious, but not like a yawn. It’s contagious because we like to be included in the “joke” or whatever was funny – that feeling of inclusion can actually make you live longer.

It can also relsease serotonin – our happiness hormone. Serotonin is often what is low in people with depression. Antidepressant medications affect the receptors of serotonin, so by increasing the amount of serotonin in your brain by laughing, you’re basically working to prevent depression – sort of.

Laughing can improve Natural Killer (NK) cell activity. NK cells are responsible for killing pathogens in the body and play a significant role in cancer, so there is actually a surprising amount of research with laughter and cancer patients. Nothing is conclusive and certainly laughter won’t cure cancer but many people believe it can help (presumably in a number of ways).
One study showed that women laughed about 126 percent more than their male counterparts, while men seem to instigate laughter more often. Women rank a sense of humor as a top 3 trait for their counterpart. Men rank women who laugh a lot as a good trait. Obviously laughing together = higher quality relationship.There is actually something called laughter yoga and I wouldn’t believe it either, but I worked at Concord Hospital’s Center for Health Promotion and they had Luaghter yoga everyday at 5:00. I always knew what time it was because the laughter would echo throughout the whole facility. It was honestly funny and always made me smile and I wasn’t even in the room!

How you can apply this to your life:

Part fo the reason this virtual life we’re living is so hard. We’re left without side conversations, and quick silly chats in hallways, or waiting in line at the grocery store. We need those little spurts of laughter. As a clinician most of the people I talk to each day are my clients so at the end of the day I always ask my fiancé if anything funny happened. Or sometimes if I hear him laughing and I’m not with a client, I pop down to his office to hear what was funny. We all need joy in life, but just make sure it isn’t at someone else’s expense because that can be a lot more impactful in their life than yours.

“At the end of the day, people won’t remember what you said or did, they will remember how you made them feel” – Maya Angelou

Beat those cravings and lose that weight for good 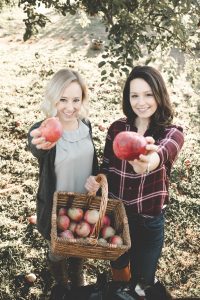 Welcome! We can’t wait to work with you